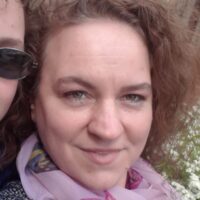 Hermina Heder is a session leader at Stonebridge Parents and Toddlers.

Hermina came from Hungary to London and first discovered Daniel’s Den when she regularly took her son to two of their venues weekly. They parted when Hermina went back to work, but soon after returned when she was off sick from work due to an illness. Joan (the formal leader of St Michael’s) invited her to socialize at her session and which later became her passion.
She has continued as a volunteer and returned to work as well. She is taking active part in the planning and development of the termly craft packs (7+ years), programme activities and after Joan’s retirement took over the leadership of the St. Michael’s group (3 years). She has wild ideas and a creative passion, as you might already have seen her creation ‘Daisy’ – the cow.

See the rest of the Session leaders.