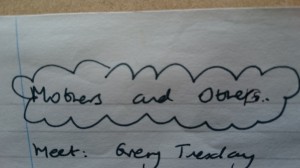 The original name for our group was ‘mothers and others’. This makes me cringe.

Historically ‘mums and tots’ was a generic term understood by many. However, by its definition, it implies it’s a group for women only. Including ‘others’ seemed like a good idea at the time. Inclusive.

So where did the name Daniel’s Den come from? To be honest, it didn’t come from the desire to have a more generic, inclusive name. I think it was inspired by God and, as time has gone by, I know it is!

The alliteration makes it catchy, even if lots of people refer to it as Dragons Den (that’s another story). People assume my son is called Daniel (he’s not) and others raise their eyebrows ‘oh, what kind of den is it?’ I like the fact it’s a name that gets people talking.

Wellytots. Holy Hamsters. Juicy Fruit. Barneys. Who let the dads out?, St Marks toddler group. Just some of the toddler groups I know. Each invaluable with its own identity.

Daniel’s Den is our name.

We use cookies to ensure that we give you the best experience on our website. If you continue to use this site we will assume that you are happy with it.Ok